Confessions of an Opium Eater an interesting find

This gem is likely an attempt to be a horror flick, but it's really more like an action packed film noir crime drama with a few horror elements thrown in for good measure.

"Dare you enter the nightmare zone of the incredible?" 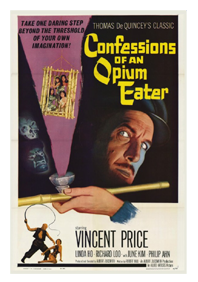 Vincent Price fans will want this for their collection, no doubt, despite that it's not the best of the films starring one of Hollywood's most beloved spine-chilling figures.

Price plays the role of Gilbert De Quincey - a descendent of author Thomas De Quincey; a caucasian man involved with a Tong.

Long story short, young, beautiful Chinese women are being kidnapped by the Tong and sold in a Chinatown slave market during the Chinatown Tong wars of San Francisco at the turn of the 20th Century. For those who don't know, a Tong is a Chinese mob, and in Chinatown they controlled opium dens, brothels, gambling parlors, and female slave trading.

De Quincey is given the task of hunting down an escapee, but when he is introduced to the torturous treatment and inhumane conditions the kidnapped women are forced to endure, he has a change of heart and acts instead to rescue them from the underground operation.

The storyline takes De Quincey through a maze of water, trap doors, flying objects and bad guys as he rescues the damsel in distress, and along the way befriends a delightful helper - a Chinese midget brimming with personality, who had also been among the women traded for opium.

In true low-budget style, some of the scenes are so fake looking it's laughable, which is one reason why I find low budget films, in general, so much fun to watch. One such scene involved a bat flying across the screen, screeching like a hawk rather than a bat.

The movie does a good job of exploring the evils and perils of illicit drug trade - and it's affect on society. In this case, it was young, pretty Chinese women being kidnapped and sold into slavery in exchange for drugs - specifically, opium. So the movie basically shows us that drug use doesn't merely affect the user, it also affects others who may not be users, and this will give a thoughtful watcher something to ponder.

It also gives us a bit of an insight into the physical and psychological effects of drug use as De Quincy experiences hallucinations, nightmares, and withdrawl symptoms during his adventure.

The movie's affects, I think, do leave something to be desired. Some of the eerie music didn't quite fit in with the movie's overall theme - I thought it sounded more like that one would expect from a movie about evil martians trying to take over Earth. Additionally, the bad trip scene was a little funky although I can see its point.

On the lighter side, though, there were some visual effects that had a shock value to them that were pretty effective - unexpected scenes that grab the viewer - so be prepared for a couple of those - one of them in particular startled me pretty good, so that was fun.

Despite the low budget quality of this film, Prices' character role is actually very good, which definitely makes it worth the viewing . I'll certainly watch it again sometime, no doubt about that.

You can purchase this movie on line at wbshop.com.